Ok, Ok, it appears that Willie Nelson is beating out Papa Smurf. However, Amy has put her foot down when it comes to the ponytail. John knew this was going to be a problem when we stopped at a little drug store and when he asked where the rubber bands were located and Amy said, “not in this lifetime.”

We left at a leisurely 7:15 this am and rolled straight into what we have been calling the Missouri “lollypaloops”. A lollypaloop is a road equivalent to a roller coaster. This simply means a two or three hundred yard hill which we pedal up at 10 or 11 mph and then down the backside at 25-28 mph. Up and down, and up and down and up and down etc.....
Since we had been seeing corn forever we decided to see just how high an "elephant's eye" is (cite: the song, Oklahoma). 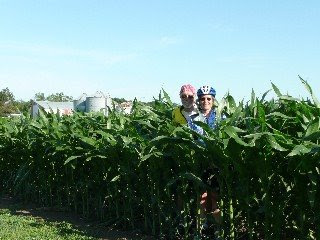 As you can see an elephant's eye, which is the height of the corn in the song, is pretty darn high. 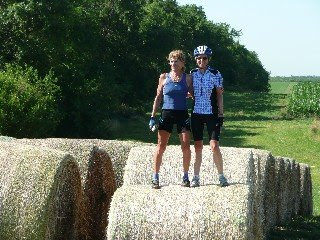 Amy had so much fun the other day climbing up a bale of hay that she invited our friend, Sue, to join her. The two ladies got quite a charge out of standing on this stuff. John had to convince them to get down and get onto the business of bike riding.
It appears that the folks in Missouri have a pretty good sense of humor. As we all know the real estate market has been in the tank for a good deal of time. Apparently a local rancher fell on hard times. 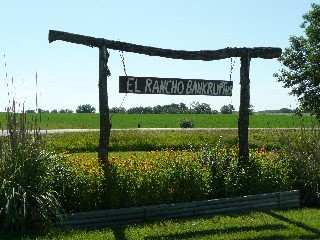 So, rather than simply take down the sign which identified his ranch he simply renamed the place, El Rancho Bankruptus. You gotta love a guy with a sense of humor.
We have ridden a number of times in Lancaster County in PA and are well aware of a number of other large Amish communities. 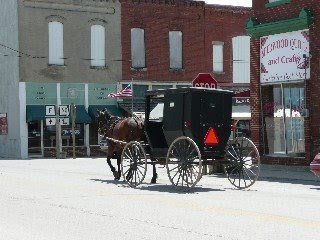 We were unaware of such a community in MO, but sure enough there is one between St. Joe and Chillicothe. We stopped for a lemonade (John is becoming addicted to the stuff) in the little town of Jamesport at an Amish bakery. Man, were the pastries great. We were at the 65 mile mark (meaning we had another 25 miles to go) so we decided that lunch was not such a good idea but the pastry sure hit the spot. 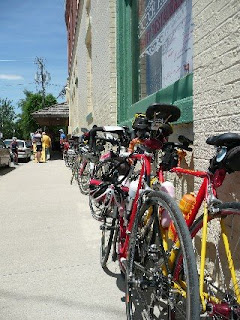 As you can see, we weren't the only ones in the group who decided to do the same thing. Bikes were lined up as far as the eye could see.
On we rode with the hills becoming a bit less of a factor. Somewhere around the 78 mile mark or so we spotted our first evidence of the floods. The Thomas River was on our route and just before we crossed it we spotted what looked like a lake. It wasn't. 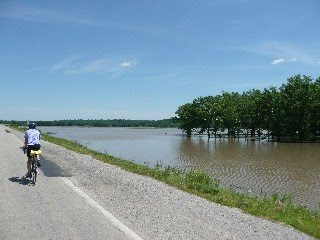 Rather what looks like a lake are really flooded fields from the Thomas. The Thomas itself is a pretty 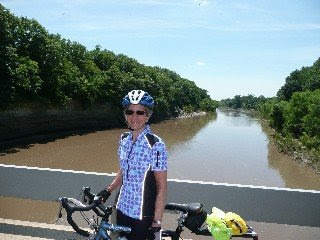 large river 0r at least it is at this moment in time, although in normal times it might not have the same look.
Speaking of rivers, we are still uncertain as to how we we will get across the Mississippi. Two of the staff members will spend all day tomorrow checking the area out to see how we over the big muddy. It may be that we will simply have to put the bikes on the SAG wagon and go across a bridge. The original plan was to take a ferry across, but the ferry is out of service due to the floods and won't be back in business for at least another month.
We rolled into Chillicothe in mid afternoon (about an 8 and ½ hour day). 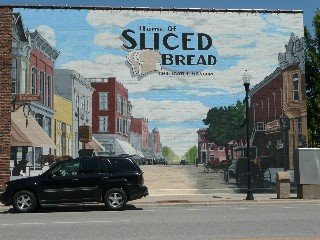 By the way, as you can see Chillicothe is the home of sliced bread.
Tomorrow is going to be a challenge. We will only ride 83 miles. By the way if someone had said two months ago that riding 83 miles could be used in the same sentence as the word “only”, we would have put that someone in a rubber suit and sent him somewhere.
The problem tomorrow is that we will climb a total of 4000 feet going over more than 100 hills. We're told it will be a “challenge” which is a polite way of saying we're going to have our work cut out for us. Ah well, at the end of the day it's still a matter of pedaling one revolution at a time.
Say a prayer for continuing good weather with winds from the west. The good vibes are certainly helping.
Amy and John
PS: If you want to see older posts for our blog you can get at them as follows: at the top and to the right of this blog you will see "June (30)" and in front of that is a type of arrow pointing to the right. If you click on that arrow and make it point down you will be able to click on any of the June posts. Hope this helps