July 20, Day 50
Latham, NY to Brattleboro, VT
Mileage: 80.5
Weather: Drizzle and overcast but no real rain
Dear All,
Well, we started the day knowing that we had today plus two more riding days and our adventure would be over. We also started with a bit of trepidation given the amount of climbing we would have in VT today. 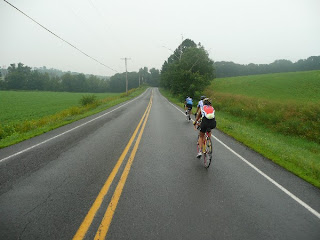 The day started with light rain but not enough to get anyone excited. Within the first 5 miles we were presented with the first of several climbs. This first one was only a mile or so but it was enough to make one use most of one's gears and given that it was only about 45 minutes after breakfast it was not an easy climb.
Speaking of breakfast, we don't think we have mentioned what most of the riders eat in the morning. It's funny. Some riders are religious as to their morning diet. The really serious ones will generally have oatmeal with a little sugar. Apparently oatmeal has a high carb count and it releases the carbs slowly over an extended period of time. The less serious riders will have cereal and perhaps biscuits. Those who figure “what the heck, I'll eat whatever and if need be I'll just suffer” will eat eggs and bacon but will almost always go for French toast or pancakes for the carbs. On top of all this a load of coffee is always on the menu.
The route for the first 25 miles had some climbs but not what we knew we would see later in the day. They tested us but didn't make us ask “when does this hill end”. We arrived at the first SAG pretty much no worse for wear and for the first time in 50 days someone had put our dough nuts. They were gone in no time. 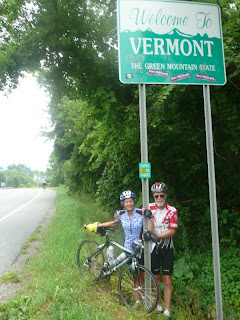 After the SAG, we crossed into our 12th state, Vermont. Looking around we knew we were in the state that's home to the Green Mountains. They were all around. And, they were pretty. And, they looked high.
We rolled into Bennington which is a really cute little city. Along the main drag they have mannequins which appear to be made of wood. 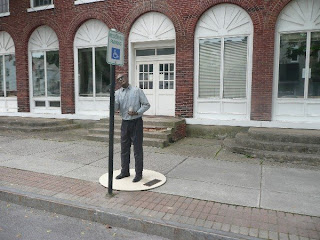 The picture shows one of them. They added a little flavor to the town. Of course the Bennington monument overshadows the town and you can see if for several miles both as you enter the town and as you leave.
Right after leaving Bennington, we came to the real tester climb of the day. We have no idea what the name of the mountain is (or if it has a name), but the climb went on for about 8 miles and the grade was pretty stiff. All the gears we had paid for when buying the bikes many years ago were used and at times we were looking for additional gears. One pedal stroke after the next. It seemed to go on forever. 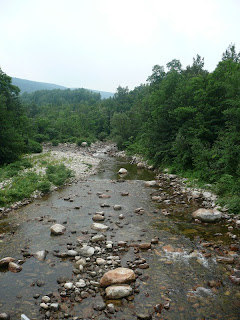 However, as we climbed the views were really great. The mountains were all around and while they were not as dramatic as the Rockies or even the Sierra Nevadas they were, nonetheless, very pretty in their own way. 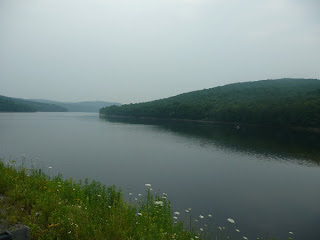 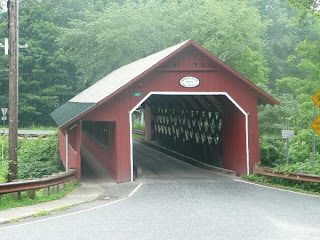 mystery to them as if they were hiding something from us.
Finally we reached the top of the first climb and had a welcome downhill for a couple of miles into the second SAG at about the 55 mile mark. We decided on a hot dog at a little stand. Turns out it wasn't a Ted's but rather a steamed dog which left something to be desired. Ah well, it was fuel.
We left the SAG knowing that we had one more climb to the top of Hogback Mountain. This climb wasn't as long but just about as steep. 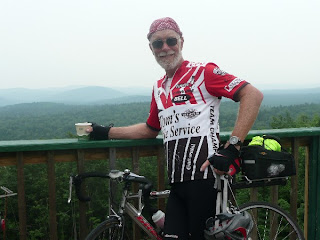 Upon reaching the top we had a spectacular view which on a clear day allows one to see about 100 miles. Today was not very clear, but the view was still pretty super. We stopped at the store at the top and chatted with an elderly couple who, like most of the people we talk to, were aghast after they asked where we started and we told them San Francisco. It's funny but when we left from San Francisco and we were asked about the trip we would always say we were going to Portsmouth, NH. Now when we are asked we don't say where we are going but where we started. 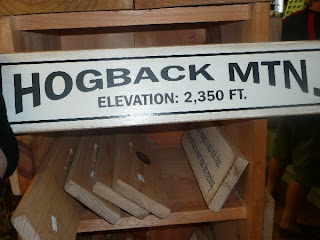 After climbing to the top of Mount Hogback and chatting with some folks we started what was pretty much (but not entirely) a downhill into Brattleboro. About ½ mile from the motel Amy spotted a Friendly's (remember she's the one who can always spot ice cream within a couple of miles of the motel) so we stopped and had some.
Tomorrow we are told the climbs will be tougher than today. Yikes!! We'll need good vibes from all of you.
Tomorrow will be a different kind of day. We'll ride knowing that at the end of the day there will be only one day left. It's a strange feeling. There is pride in knowing that we're close to our goal and that we will soon be home. But, we will be saying good-bye to some new and wonderful friends and we'll miss them and the riding (despite the fact that some of the days were hard). We'll let you know how we feel tomorrow night with only one day left.
Say a prayer to the weather gods for the next two days. Your comments are always welcome.
Take careand send the good vibes.
Amy and John
Posted by John and Amy at 12:29 PM

In all great dramas that deal with the "mighty quest" or "saving the empire" or "gaining the golden fleece..." etc., the last test on the hero/heroine is always the hardest. We will be with you on your last great climb tomorrow and know that you will grit your teeth and prevail.
In a few days there will be much celebration for our returning heroes! We are most proud. In no small way we all ride with you. We will miss reading about your adventures but we will be happy that you are back safe and sound.
Like Aunt Mil's trip on donkeys to the bottom of Grand Canyon we look forward to hearing your stories for the rest of our lives.