July 2, Day 32
Chillicothe to Kirksville, MO
Mileage: 81.6
Weather: Wet for about half the way.

Well, the weather gods decided to ignore your prayers today, but all in all it wasn't too bad. We had been warned that the day would be difficult given the hills so we were on the road early at 6:30. 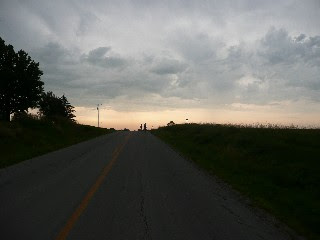 The skies were threatening and for the first time the rain actually fell on our parade. Luckily the temperature was comfortable so although we were reasonably wet we didn't feel all that cold. The thunder and lightning hung out just to the west of us for hours with some pretty impressive flashes of lightning but nothing came close enough for us to get terribly worried.

We had been told that the first twenty-five miles were going to be relatively flat and then the hills would present themselves in all their glory. We were told correctly. Right about 25 miles the hills started. Some of them were mighty steep requiring that we use every gear that Tom at Tom's Bicycle Shop had installed. Amy suggested that a couple of additional ones might have been helpful. Apparently, there were a total of 99 hills in the last 50 miles. The total elevation gain was over 4000 feet. Riding these hills in the rain was exciting particularly on the downhills as the water on the road flew off the tires. 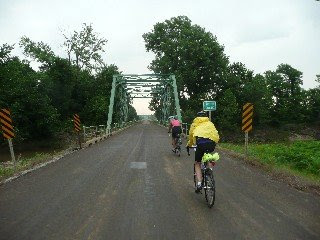 As we rode, we crossed any number of narrow bridges with signs announcing that cars going in our direction were to yield. John thinks he recalls looking over his shoulder and seeing signs suggesting traffic in the other direction was also to yield. This could, it seems to us, lead to an interesting situation. 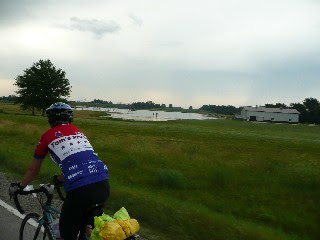 The second SAG stop was suppose to be at 54 miles, but because the group was so spread out, it as canceled. 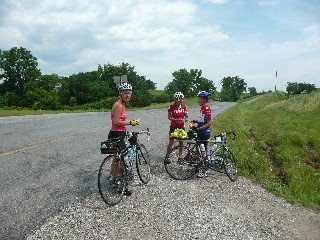 As a result, we, along with Sue and Audrey, took a bit of a lunch break on Rice Krispies Treat, raisins, and crackers. 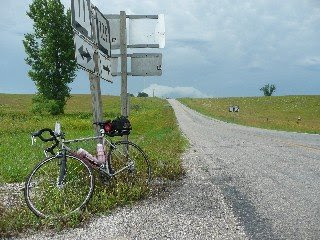 As you can see from the picture with John's bike in it, the clouds were chasing us.

For those who don't know it, Kirksville, MO is the home of Osteopathic Medicine started by Dr. Still, MD, DO. Since our son, Ed, is a DO, we certainly had to 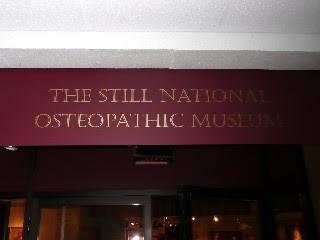 visit the museum which is really quite fascinating. Apparently, Dr. Still was the first to secure cadavers on a regular basis for his newly founded school. 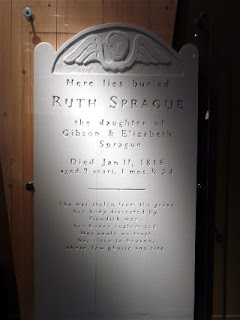 This created quite an uproar as evidenced by the headstone shown here. 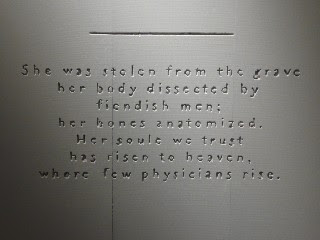 We have enlarged the bottom of the headstone for your reading pleasure, but for those of you who are unable to read that portion it says: "She was stolen from the grave her body dissected by fiendish men; her bones anatomized. Her soule we trust has risen to heaven, where few physicians rise".

Over the next three days, we will ride 97, 101 and 103 miles respectively. If ever there was a time we would appreciate your prayers for west winds and no rain this just might be the time. In addition, of course, your constant good vibes are always welcome.

Nice photos today John. Good to see some of your gal pal / riding buddies. Keep on chuggin' Amy. We're rooting for ya!

John, I did a little research yesterday and wanted to see exactly how far you have gone on a map of the country and all I can say is "WOW".... This is fascinating to me and inspirational. The way I look at it is if you and Amy can do this, then anything is possible and as individuals, if we see a goal we want to reach, we should just keep on "Keeping on" towards it.

You are all an inspiration and I thank you for your positive influence especially on me.

Amy and John,
Love reading your blog and looking at the photos. Congratulations on making it beyond the 1/2 way point. Its impressive to see how far you've traveled on the map in front of your office. Sorry about the rain. I will pray harder. Regarding your earlier blog it is good to see someone else gets lost on a bike.
You are both truly motivating.
Fran