Well, we've got four more days of riding. Hard to believe. We are told that the riding on Sunday and Monday will be hard and to be prepared for them. We guess we are.

This morning dawned with a bit of an overcast but very warm temperature. 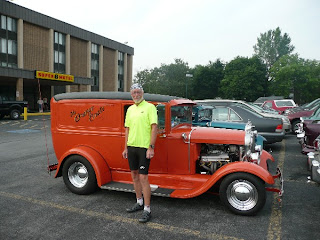 Before departing we spent a little time looking at some of the hot rods that were in the motel parking lot. As we said yesterday, Liverpool has a huge car show starting today and a number of the car owners were staying at the same Super 8.

We started out a little after 7:00 with really nice roads. They were mostly small country roads with only little rolls to test the legs from time to time. We hooked up with Fred, Allan, Skip, CJ, and Don and kept up a pretty good pace (around 19.5 mph). Amy's legs were good today and she was flying. The country side remained as in the last couple of days, but today it really looked more like rural residential than rural business. Just a house here and there and open fields that weren't cultivated. A very pleasant ride. 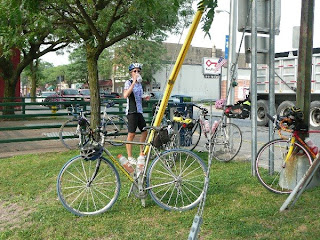 The first SAG came quickly and we enjoyed our typical fare. We haven't mentioned what is available at the SAG so maybe now is a good time to do so.

When we stop, the staff has opened the van so that everyone can (and MUST) use handiwipes before touching anything. You can't even refill a water bottle without first using the handiwipes The food available is usually cut up oranges and apples along with bananas, granola bars, nut and salty bars and trail mix. Fig newtons make the hit list from time to time as do sugar cookies. In addition to water there is powdered gatoraid to be added to the water bottles. If one is having a mechanical problem there are some tools along with chain lube. Most riders spend anywhere from 10 to 20 minutes at the SAG stop depending on how long the day will be. The longer the day, the shorter the stop.

John's sister, Peppy, asked what John carries in his bike bag. First you should know that most of the bikers don't carry a large bike bag at all. Most carry a simple little seat bag that fits more or less under the seat. They carry only an extra tube, a multi tool, and a tire iron. John's bag carries much more than that. Since only John has a bag, it hasat least two tubes for his bike and two for Amy's bike which is required since Amy's wheels are a different size than John's. In addition, to what other riders carry, John's bag carries both wallets, a multitude of snacks in case we get hungry between SAG stops, our non sunglasses, a number of CO2 cartridges to inflate tires and John's rain shirt.
Back to the day. 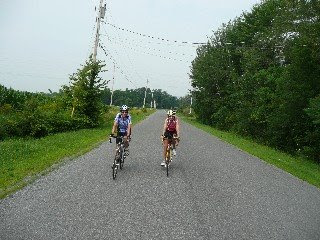 After the first SAG we joined up with CJ, and motored on. There really wasn't much to look at except that from time to time we rode along side the 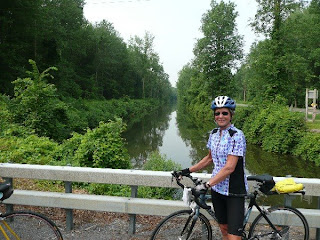 Erie Canal which was fun.
We arrived at the second SAG and thought about lunch,but after hanging around a bit we decided that maybe we would get lucky and find something different than a Subway up the road. Amy seems to be able to not only locate DQ's when necessary but also find some pretty cute little places for a bit to eat on days when we think we'll have time for lunch. Today was one of those days. So, we're pedaling along in a kind of wasteland with not much around when all of a sudden, up pops the cutest little spot run by two elderly ladies. 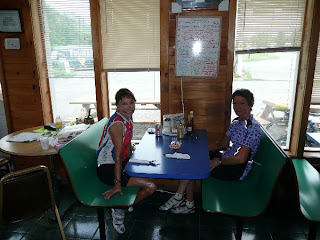 It wasn't much to look at but the sandwiches were delicious. There were a total of 4 tables and there was air conditioning which was very much welcome. CJ ordered a ½ size sub. The thing was huge. The ½ size was at least the size of a full size Subway and the cost was a whole $4.00.
After lunch we headed into Little Falls. We commented on the fact that we have seen Little Falls from the Thruway but had never actually driven into town. It seems like a nice little place although it probably has seen better economic times.
There was a laundromat across the street from the Knights Inn so we decided that since we are never sure when a motel will have laundry facilities we had better do the laundry while we had the chance. We have spent a little time in laundromats over the term of this trip and most of them are quite nice. The one thing they really lack is air conditioning. They are HOT. We mean HOT. So we usually sit outside on a curb or if we're lucky on a bench, read a book or work on the blog.
Tomorrow we head to Latham, NY. We're hoping that the road continues to follows the Erie Canal which means that it won't have a lot of hills.
After tomorrow we'll be heading into Vermont and the Green Mountains.
Thanks for reading. Keep chatting with the weather gods and, as always, send the good vibes.
Amy and John
Posted by John and Amy at 12:40 PM