We woke at the appointed hour, 5:40, and again your prayers to the weather gods had been answered. It was a beautiful, clear, and most importantly, still morning. Breakfast was in the hotel where John had the good fortune of spilling a whole box of Frosted Flakes all over the floor. This engendered some comments concerning his dexterity but mostly it caused laughter. 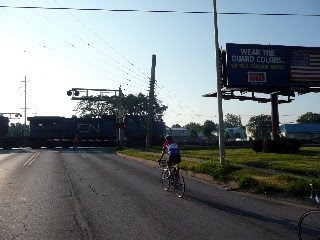 Within the first 3 miles, we came to a railroad track with the guard rails down and the red lights blinking. The slowest, and we mean slowest, freight train known to man was inching its way across the intersection. This train looked to be a mile long. It proceeded 200 yards up the track and stopped.
This created a collective groan from the riders. It then decided to back up 100 yards and stop. There was some discussion about crawling under but wiser heads prevailed and we proceeded to follow the directions of a local truck driver that took us a bit out of the way but under the railroad tracks. 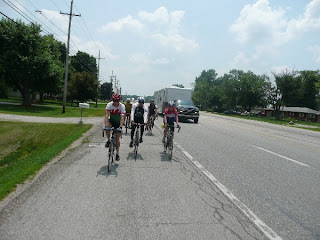 Back on route, three of the very nicest guys and best riders in the group, Wayne from Wales, Steve from Australia and Al from Germany invited us to join them. You should understand that these guys generally motor at well over 20 mph all day and can leave anyone, with the exception of perhaps George and Larry, in their dust. Amy refers to them as the “hot shots”, a phrase she uses with real respect for them and their riding ability . We rode with them all 83 miles. It was a delight. As you might expect, John was full of questions about government, culture and sport. It took Wayne and Steve a good 30 miles of patient (perhaps the patience of Job!?) explanation of the game of Cricket before John finally saw the light. Now we need to find a TV station so John can watch a game. Thanks guys!! 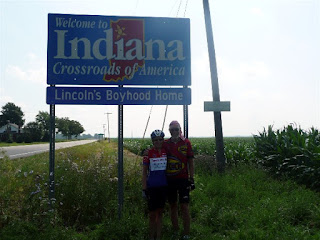 After the first SAG stop, we, the foreign contingent, and Sue who joined us, rolled into our 8th state, Indiana. It seems that everyone is claiming good ole Abe as their patron. Back in Springfield, IL, you couldn't go a block without seeing an Abe historic marker. We enter IL with immediate reference to this state being Abe's childhood home. 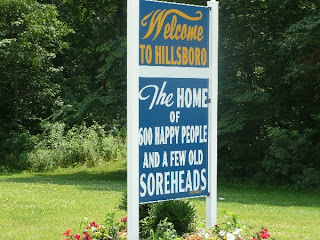 The people of Indiana must have a great sense of humor. Where else would you enter a town with a sign such as the one depicted here. As we rode through town we tried to find where the soreheads lived, but they were not immediately obvious. 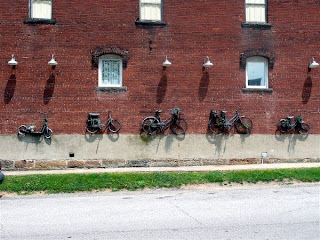 A little further up the road, we discovered what Indiana residents do with old bicycles. 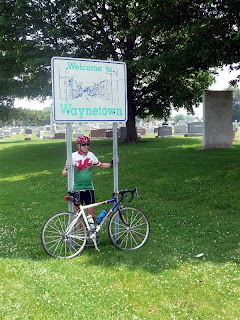 They plant them on the sides of buildings.

Nearer the end of the ride,Wayne, who you will recall is from Wales, discovered that the good folks of IN decided to name a town after him. At the very least, it was a Kodak moment.
Well folks. We have passed through all the time zones in the continental US and today have set our watches to the same time as it is in Buffalo. That's a lot of miles on two wheels under our own power.

One more day of riding before a rest day. As we enter Indianapolis tomorrow we hope we have an opportunity to see the “brick yard” (the Indy speedway). Last year the riders on this trip had the opportunity to ride their bikes around the track but this year we do not believe it will be possible. We hope to at least visit the speedway.

You all have been doing a marvelous job in your prayers to the weather gods and your sending of good vibes. We feel your good vibes each day and appreciate them. When the days are long and all we want to do is get out of the saddle, we feel your good wishes and continue on. Thanks.

Dear Amy, Happy Birthday. This is one you'll never forget!

I am technically challenged so my
messages don't seem to go through but I will try again.

You must be wondering if you look as old as your husband. You do not! Have a good ride. Susan