We awoke still thinking about how nice it was to have had family and friends welcome and visit with us yesterday afternoon and evening. It was wonderful.

We awoke at the more or less usual time of 5:40 and were on the road by 7:00. Prior to leaving and as we were loading our luggage, Amy felt a hand on her shoulder, turned to see our friend, Tom Barney, Jr. He was on his way to work and guessed as to what motel we might be in. It was wonderful of him to think of us and it really touched us. 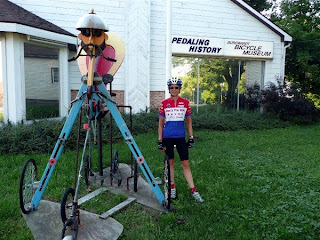 We headed out and proceeded to get lost with all the other riders but found our way to the Bicycle Museum in Orchard Park. 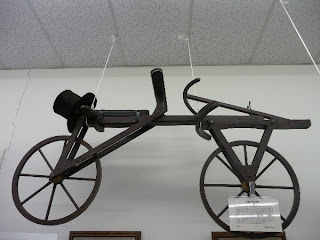 What a great place. 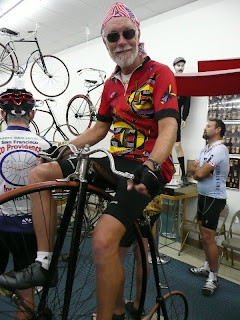 For those of you who haven't been there, you should go. This is true even if you are not an active biker. It is a fun and informative place.

We finally departed the Museum at about 8:30 and since it was going to be a long day, we knew we had to hustle. As we proceeded toward the first SAG stop at the 30 mile mark, the clouds began to gather and in the distance the thunder began to rumble. Within a mile of the SAG stop, the lightning was all around us and very close. Just as the skies opened, we made it to the SAG stop at a gas station so we were able to find some shelter. Many of the riders did not have rain shirts with them since the forecast did not call for rain. Guess that just goes to show that weather forecasting is more of an art than a science.

After a little wait the rain slackened off and we took to the road. However, prior to leaving the gas station, a rather rotund fellow from the local Dept. of Public Works, stopped us and asked where we were riding to. He kept looking at us in a funny way and finally said, “Didn't I see you on TV last night?” We answered that he probably did and he then ran to get his camera from his car and took our picture. I guess this qualified as our “20 seconds of fame”. 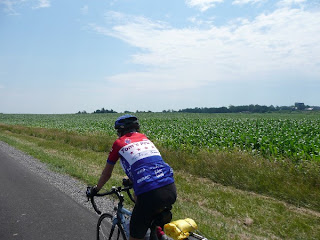 Down the road we pedaled. Within a few miles, Amy experienced her first flat tire of the day. There were more to come. John spent some time fixing the flat and off we went again,. Within a couple of miles, Amy had flat #2. This was turning what was going to be a relatively long day into a longer day.

After fixing the second flat, we rode on experiencing hills that weren't quite MO like, but far more than the easy rollers we had yesterday. The vineyards had given way to fields of corn reminiscent of IL, IN, and OH.

We rolled into the second SAG stop at 68 miles at about 1:30. The question was whether to eat lunch or just keep going. The decision was to eat a banana or two and press on. Within another 10 miles, Amy had her 3rd flat. By now, we were out of tubes so we waited for the SAG van to roll by and picked up a couple (one for a reserve). In the process of fixing the flat, John noticed that Amy's relatively new tire had a pretty good gouge in it. John put in a new tube and off we went in hopes of making it to the hotel without another flat. Success! 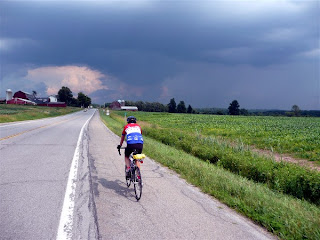 You can see from the picture we barely missed our second storm of the day which was just ahead of us.

After arriving at the hotel, John spent an hour cleaning the bikes and replacing both of Amy's tires.

The day was long but interesting. NY is a beautiful state and we should all be appreciative of where we live.

Tomorrow we head to Liverpool. The rain gods seem to have become somewhat displeased with us. We can't recall saying or thinking anything negative, but if we did we apologize. Perhaps you could all intervene on our behalf.

Keep going strong. Really have been enjoying your daily blog.

I read it either the last thing at night or the first thing in the morning.

John and Amy,
It was great to see you yesterday and witness firsthand the flurry of activity that occurs as 30+ riders get set to ride 80+ miles. As you know I immensely enjoy this blog and will be a bit sad once your trip is over. Keep peddling and as always I'm thinking good vibes and prayers to the weather gods.
Tom