Our fourth last day on the road and it was beautiful. NY never looked so good and our lovely high humidity was at its best. 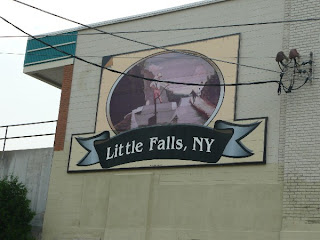 We left the little town of Little Falls at about 7:30 and within no time at all, we hooked up with Rick, from Richmond, VA, who is a wonderful guy, and a young man, Dan, from Sarasota, who is riding the section from Indianapolis to the coast with his grandfather. We essentially rode on Rt. 5 which has a great shoulder and for miles and miles we had the Mohawk River on our right.

Some of the vistas were really lovely 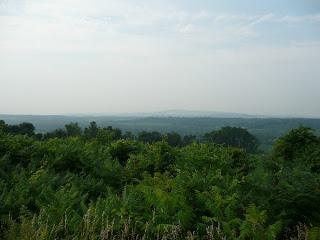 especially in the morning with the mist hanging over the landscape. We began to feel the elevation changes that we know we will experience tomorrow and the next day when we ride into Vermont.

Amy was incredibly strong today as she was yesterday. With John and Rick pulling, Amy and with Dan (age 17), hanging out next to Amy, we 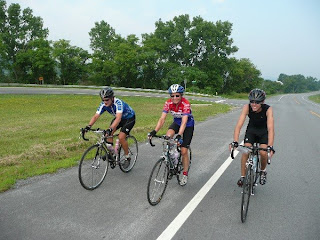 motored along at an average speed of about 18 mph for over 34 miles. Despite the speed, we had plenty of time to chat and marvel at how pretty the Mohawk Valley is. We had only seen it in the past from the Thruway, but from Rt. 5 and at 18 mph it takes on a whole new look. A look that we recommend to all of you.

At the first SAG we had a wonderful vista over the Valley and saw how some riders “hang” their bikes during a break. 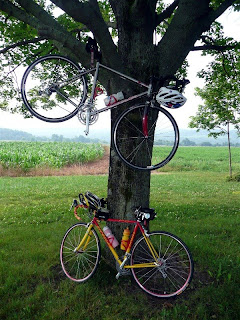 When hung in a tree one does not have to worry much about the bike falling over and damaging either the paint or the dérailleur.

After a break we headed out and continued the same pace, but always willing to stop and look at the River. The second stop was at Jumpin Jacks Drive In which had the feel of a Ted's Hot dogs. The specialty was hamburger with all the grease you could eat. GREAT! Probably not what our doctor would suggest for a healthy lunch but boy did it taste good. No milkshakes, however, since, with almost another 20 miles to go, milk isn't such a good idea particularly since it was hot with humidity that had to be 140%. 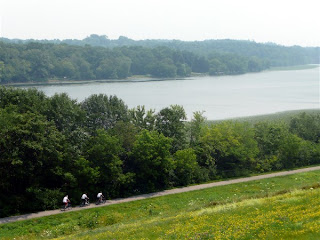 Off we went with CJ, from Sarasota, along with us. 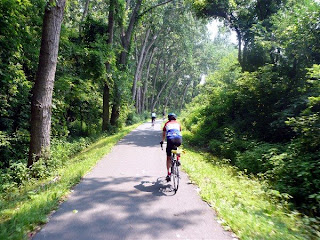 At about the 61 mile mark we picked up a great bike path that went on forever. Most of it was in pretty good shape although some if was in need of a bit of blacktop repair. 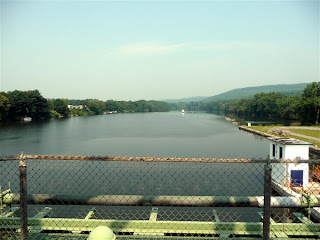 For miles we rode along side the River in the shade of wonderful old trees. Except for our speed it was what one would expect for a pleasant Saturday bike ride at home. Delightful.

We rolled into the motel a bit tired from the speed of the ride, but happy to have had such a pretty ride. New York around this area really is an undiscovered treasure. If you get a chance you should experience it.

We have three riding days left. The next two will be the toughest of the entire ride we are told. The Green Mountains aren't as high as the Rockies but they are much more difficult to ride. Tomorrow for instance we believe we will experience 12% to 16% grade climbs for up to a couple of miles. As a comparison, the ride up Monarch Pass in CO was over 8 miles long but it was about a 6% or 7% grade. As you who rider know, a 12% or greater grade will require every gear we have and then some. Our hope is that our legs are ready for it although we both commented this morning that after 44 days in the saddle these two bodies are beginning to suggest that they are getting just a bit tired. It will be interesting.

Say a prayer or two that the rain holds off and don't give up on the vibes. We still need those good vibes.