Well, today was everything that was advertised. Tough. Really tough. But, as advertised, we were ready for it with 46 days of riding in our legs.

The day started innocently enough. We loaded early (6:30) because the staff knew it was going to be a dandy. We were on the road by 7:00 and within a mile the hills began. Unlike Vermont, these hills were both long and steep. 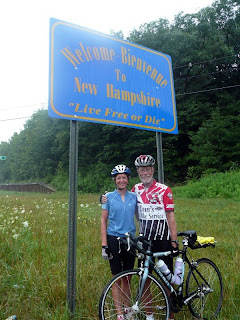 Within the first mile of the day we entered our 12th state, NH. We looked at each other and simply said “we can't believe it, 12 states”.
For the first 17 miles the hills were doable without using every gear known to man. The riders who have a Garmin GPS and who were riding with us told us that the grade varied between 7% and 9%. Tough but, as we say, doable.

We rolled into the cute little town of Keene, NH and after slowly riding down Winchester St. we turned onto Old Concord Road. Then the fun began. That road kicked up to about 12% and went on for a little over 1.5 miles. We thought, “hey, we can handle this.” In fact, the riders we were with all felt the same way. We then turned onto Sullivan St. and the real fun began. The tilted up to what we are told was an average gradient of 15% to 18% with a couple of spots at 22% (according to the Garmins). Now for you who don't ride, 22% isn't just steep, its damn steep. You would have trouble walking up a road with that gradient. Well, we made it. Our heart rates were probably off the chart and Amy was having some difficulty breathing but we made it. 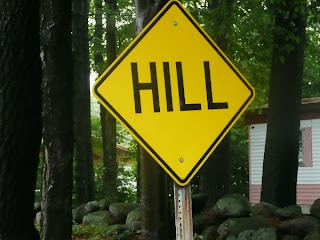 At the very top of the climb some DOT worker had decided that it would be fun to let both cars and riders know what they had just been through so he stuck up a sign that said “HILL”. This is a guy who really should be a stand up comedian.

After Sullivan St., we thought, “OK, what more can they throw at us on our second last day?”. We shouldn't have asked the question. 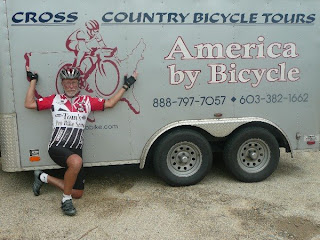 At the first SAG stop, there were a bunch of very tired riders but we had only completed 27 miles of an 88 mile day so there was considerable talk about what lay ahead. After the SAG, we attacked Pitchers Mountain. Here the gradient was probably in the 14% range which would normally have led us to turn around and call it a day, but given what the earlier ride had exposed us to, we handled that particular mountain quite well.

It was right about then that the weather gods (who had been talking to the gradient gods) decided that they wanted a hand in this day. The skies darkened and before long we were in a steady rain. Not a downpour, just a steady rain. The type that soaks everything and requires windshield wipers on your glasses. However, the temperature gods decided that enough was enough so they played on our team and kept the temperature pleasantly in the mid 70's. 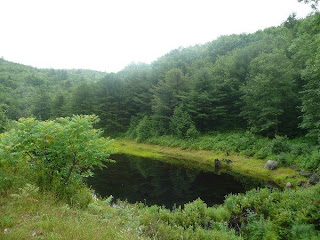 The scenery was very much like Vermont although given the rain it was hard to see very far and very difficult to take any pictures (sorry). We saw some really beautiful homes nestled in the woods and a couple of really lovely lakes that looked like they could have been in the Adirondacks or for that matter in Algonquin Park, Canada. Really very nice. 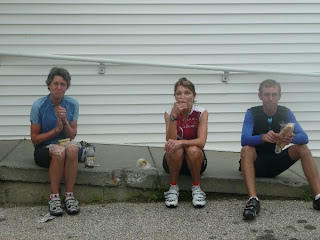 We stopped in the little town of Greenfield for a sandwich. The town is basically an intersection but we've learned that in little places like this you can usually find a little grocery store that will put together a really great sandwich. We, along with CJ and Dan, sat and had a delightful lunch while the rain let up.

Back on the bikes to finish the ride and within about 20 minutes the skies really opened up. The balance of the ride (about 25 miles) had rolling hills (maybe a grade of 7% or so) but with the rain it made the riding a little dicey, particularly the downhills. 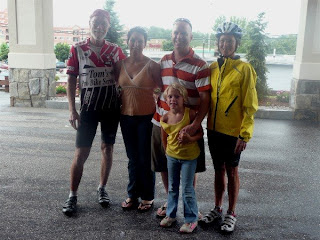 We rolled into the motel and to our surprise Maria Hadley and her husband, David, along with their seven year old daughter, Chelsea, were there to greet us. Maria was an attorney at Phillips Lytle about 8 years ago. She's a great gal and we were delighted that she would take the time to stop by and say hello. Thanks Maria, we loved seeing you.

Amy has become a really great rider. Her ability to handle hills and the wind has improved 100% to the point where she finishes the day in the middle of the pack and on many days in the top 1/3rd In addition, her bike handling skills are great. Today, for instance, in the pouring rain she handled downhills with speeds in the mid to high 30 miles per hour.

Tonight we have a kind of banquet and it will be a kind of farewell to all since tomorrow, after we dip our wheels in the Atlantic, most of the riders will scatter to the four winds. We expect it to be emotional but fun at the same time.

Tomorrow we ride to the Atlantic. And then, it's over!! We'll write about our thoughts tomorrow or perhaps the next day. But, no matter what, your good vibes have been with us each day and have made all the difference.

We'll talk to you tomorrow.

You've got one more day to send the good vibes. Thanks.

My thoughts are with you tomorrow as you dip your tire in the Atlantic. Thanks for the wonderful reading.... my days are just not going to be the same without it!!!!

See you back in the office soon.

You two have been an inspiration to me and everybody I have told of what you are doing. They are all amazed to say the least.
CONGRATULATIONS is to common a word to describe what you have accomplished. I will admit I do not have the vocabulary knowledge to find the best word...amazed, proud, in awe (I know it is 2 words), astounded (but in reality not really). Maybe somebody else out there who comments on this site can help me out. Welcome home MOM and DAD!!!

I can not believe that your adventure is nearly over. It's actually been more like "OUR" adventure . . . all your friends have been "right there with you" - all 12 states! Other than the absence of total exhaustion at the end of the day - I feel like I did the whole trip WITH you both! (ha ha ha - well - you know what I mean)!

I am truly going to miss "checking in" with you both on a daily basis!
Thanks for such an interesting summer!

I just wanted to wish you both luck tomorrow on your last day. I'm also very proud of you and can't wait to see you home! Congratulations on a job well done!! I don't know what I'll do now without having to have to check the house every other day! But now I'll be able see you in it instead of checking it!!! Bobby and Thelma and I are awaiting your return!
Love, Meg

John and Amy
I hope your last day of riding will be memorable. It is hard to believe this all started 52 days ago.

You are amazing and special people. Keep it up and ride safe

Welcome home...the end of the trail!! You two are phenomenal; I
hope you think about putting your
journal notes in to some sort of
book form!!
LOL Pat

Congratulations, you have completed an magnificent journey that only a few could dream of attempting. Thank you for sharing your time and thoughts with us along the way, it has been most enjoyable. Savor the moment and remember it forever; you certainly earned it.
Tom

Job fabulously done - congratulations. It is about 1 pm on Tuesday. I have been thinking about you all day. If I feel emotional about this ending* , I cannot imagine how you feel. Cherish these last miles.

Thanks for taking me along with you - I will miss the blog.

*or maybe just overjoyed at the prospect of John's return!!!