A second century in two days and this one had some hills that OH must have imported from MO. More on that later.

The day started out as all of them do with our awakening about 5:30 followed by breakfast and then loading luggage. We were rolling down the road by 7:00. John needed a rain shirt since the one he has was both cheap and was much like riding inside a sauna. Luckily one of the staff was aware of a nice bike shop in Delaware, OH and the owner was willing to open the place really early at about 8:00 just as we rolled into town. It really was a great bike shop and he was most accommodating. John found just the light jacket he was looking for. This little detour added a couple of miles to what was already a very long day.

As we rode thru this part of OH the only word we could come up to describe the area was “neat”. Ads we suggested in our report yesterday, the rural folk in OH must take incredible pride in their home and farm ownership. The pictures we took cannot fully show how painstakingly caring these people are with their land. There are gardens that would make any magazine and they grow right up next to the beginning of the corn field. Any pone of Jack Nicholas' championship gold courses would be proud to have fairways as meticulously maintained as the front lawns of the houses we rode past. It really is, at least so far, a very pretty state. 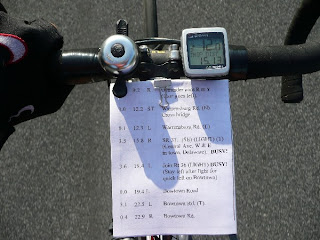 As we were riding along John decided that you, our friends and family, might be interested in knowing how it is we can figure out when to take a left or a right. As a result, John took a picture of his handle bars and ads you can see there is a calculator on the right, the route in the center and a bell on the left (the bell thanks too mark Mahoney). You may be able to see in the route the left hand column shows the distance between turns, the next column shows the total distance at each turn, the next column indicates right, left or ST (straight through). The final column gives you the road name and sometimes the direction and whether or not there is a stop sign, a stop light or a T intersection. 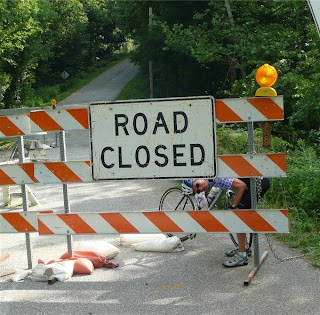 At one point along todays ride we encountered a bridge closed to all traffic. However, we were told to ignore such a sign and proceed. No, we did not have to swim across or wade. Rather we carried our bikes over some chains 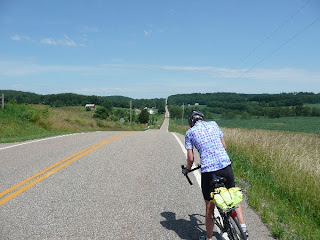 It was shortly after the bridge that we discovered that, many years ago, OH imported hills from MO . No only did OH import the hills, they decided to steepen them. These things went straight up! No picture can show what these look like but they put the fear of God in us as we approached them. The hills went on mile after mile. But, for the last ten miles, softened ever so slightly. 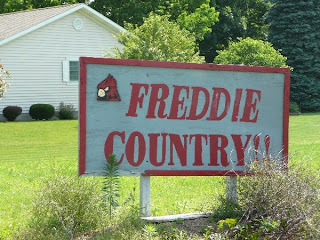 We were unaware that Amy's brother, had at one point in his life, visited OH. We are betting that his family doesn't even know it. How then, you might ask, did we discover this fact? Fred left a sign.

Tonight, John sister, Ellen, drove from her home in Bay Village, OH to Wooster and had dinner with us and the other riders. 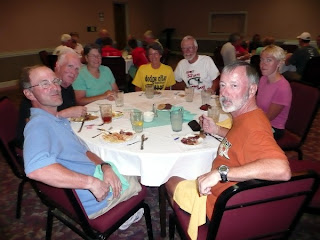 It was a delight to see her and we appreciate her visit.

Tomorrow is another long one-92 miles. Keep saying prayers for those winds and as always, keep the good vibes coming.

Great to see you both- you are amazing people and I am so very proud of you both. What a fun group of people you are with. Take care and ride safe
Love
Ellen

Funny you should mention GOLF - THE LPGA "Jamie Farr Classic" is being played in Sylvania, OH (near Toledo). Don't know how close you are or will be to there but . . . just a little "FYI"!

Safe riding to you all!

I can't believe how close you are getting. What an adventure! You are my heroes again. Amy, hope you had a great birthday.
Maggie