Today was to be an easy day with only 70 miles with some hills but nothing to get to worried about. As Amy loaded our luggage, John pumped up the tires. As he was pumping up Amy's front tire, there was a load bang and again Amy had a flat. John put in a new tube, we both crossed our fingers and off we went. 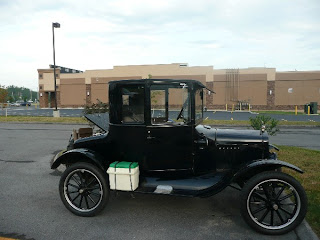 Prior to leaving we spoke with an elderly guy (elderly, of course, is in the eye of the beholder) who was driving his Model T to Michigan. As you know that particular car could be purchased with any color the owner desired so long as it was black. John spent a little time chatting with the owner and learned that the average speed for the trip would be about 35 mph (just about double our speed down the road). 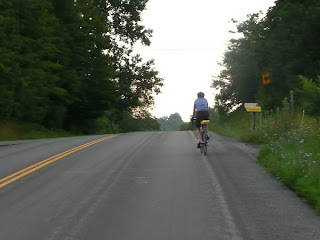 The countryside was the same as yesterday except we had the pleasure of seeing Lake Seneca up close as we pedaled thru Geneva. We passed by early in the morning and it looked lovely. The riders from out west and from oversees where really impressed not only with Lake Seneca but with all of the Finger Lake region. As we have always said, the Finger Lakes is really a well kept secret. Most people speak of the Adirondacks as the only really great spot, but the Finger Lakes are, in our view, equally impressive. 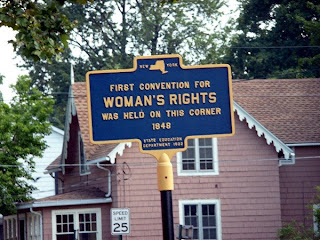 Seneca Falls which, of course, is the birth place of women's rights.

As we rolled into the first SAG stop at about the 30 mile mark, the clouds to the north began to look pretty impressive and threatening. Off we went and within a few miles it became clear that we were in for some serious weather. As the rain started we found a house (which looked like no one was home) and sat under three of the biggest trees you have ever seen. 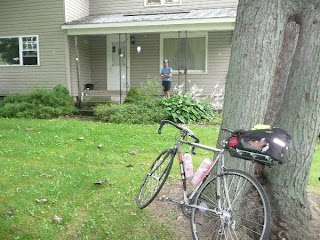 It was like having a real roof over our heads. The rain came down pretty seriously for about 20 minutes and then we figured, what the heck, lets go. We got a little damp but the heavy stuff had pretty much stopped.

A little further up the road while it was still raining we stopped at the Red and White Creamery Cafe which was housed in a building that was constructed prior to 1840. 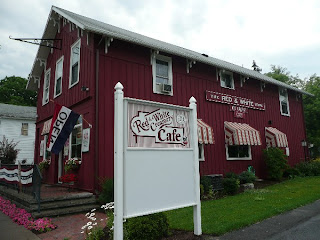 It was a great spot with homemade bread and the biggest sandwiches you have ever seen. We ordered one sandwich which we split and even at that we didn't eat all of it. There was some homemade chocolate cream pie that looked absolutely spectacular. 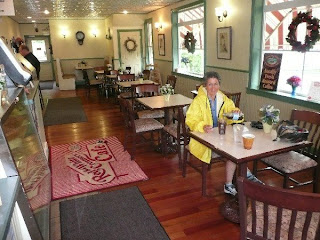 We toyed with the idea of a piece, but figured that with over 35 miles to go, it really wasn't a great idea. Someday we're going back and have a piece. 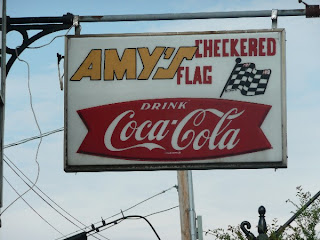 In one of the small towns (we can't remember the name) we found Amy's
Checkered Flag. John asked Amy when she had had time to open a little store and only received a mischievous smile in return.
We rolled into Liverpool and as you might expect, Amy spotted a nice little ice cream spot just a mile or two from the motel. We asked the owner if they had sugar free soft ice cream, and he took one look at Amy and said, “are you kidding, the last thing you need to worry about is sugar”. 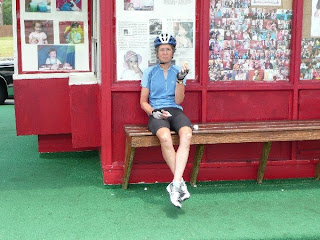 So we indulged and had a delicious vanilla cone and sat and watched some hot rods drive by on their way to a local park where a car show is scheduled for the weekend.
Tomorrow is an 85 or so mile day and we're told hills will be present.
Say a prayer to the weather gods and keep the good vibes coming.
Amy and John
Posted by John and Amy at 1:54 PM