July 4 Day 34
Quincy to Springfield, IL
Mileage: 106.8
Weather: Lovely with a slight but not unbearable headwind.

Happy Fourth of July! It is fitting that on the 4th of July we cycle to Abe Lincoln's home. 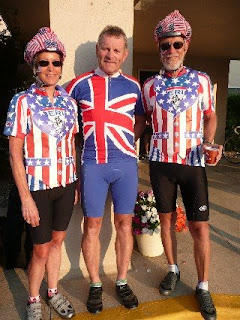 The group as a contest on the 4th of July to see who can dress up their bike or themselves in the most festive manner. We had no intention of participating except that a couple of days ago as we rolled in to some town we spotted a Dollar General and pulled in. Our bikes simply had an American flag attached however, we decided to decorate ourselves for the occasion. 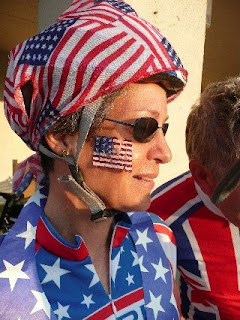 As you can see, helmet covers, face decal, flag vest and in John's case, borrowed American flag underwear were donned. Others, such as Richard, from Ireland, wore an American Flag cape and Steve, from Tasmania, and Sarge, from Trinidad, decorated their bikes to perfection. 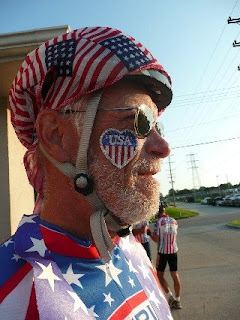 It was all in good fun. 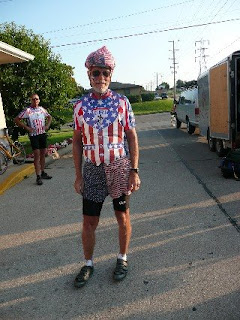 Today was another century. We really have lost count on how many 100 miles days we have ridden but it is a pretty good number.

Illinois is really a beautiful state. We started the day with hills that were not as steep as MO but added a lovely variety to the riding. 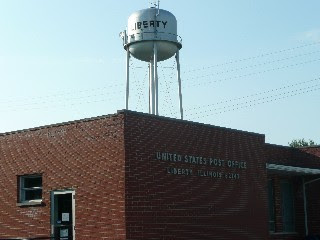 We rolled through little towns including one called, Liberty. Again, appropriate for the day.

Back in MO, we saw corn fields but not like we saw today. After the first SAG stop, the road straightened out and 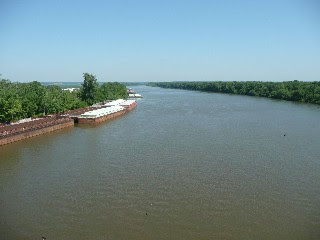 we crossed the Illinois River. It's big. Not like the the Big Muddy but big none the less. The road leveled out and the corn became king. 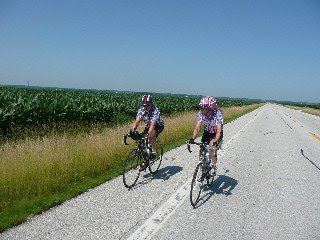 As you can see in the picture of Amy riding along side Don, from Las Vegas, corn was everywhere. At one point, Amy got off her bike in an effort to see if there were any ears of corn on the stalks. She found none. Obviously, not being farmers, we are a tad curious as to how you can have a corn stalk over 6 feet high with no ears of corn on it. If we can stay awake past 8:00 pm we will try to find the answer on the net. 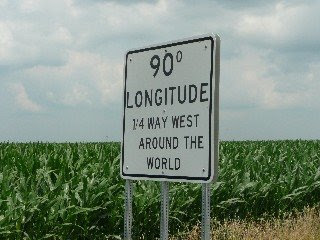 In the middle of all this corn, we did come across a rather curious sign. We're guessing you all know what it means.

At about 70 miles out, both of us begin to hurt in various ways and on various parts of our anatomy. The last 20 miles of the century days always seem like 40. At about the 80 mile mark today, we simply stopped, parked our bikes, sat on the local church front steps and ate a peanut butter and jelly sandwich which John had been carrying in his bike bag all day. We chatted and watched the locals mowing their lawn. The simply pleasures of bike riding.

We rolled into Lincoln's hometown, rode past the capital, and into our motel. It was a long day but a nice one.

By the way, Ed (our son), spent some time in this town after medical school and despite our visits during these years, nothing we saw today was familiar. We either rode through a different part of town or our aged memories are failing. We arrived too late to do any Lincoln sightseeing.

Tomorrow is another century. They seem to be common place now a days although they are still long days. IL is a pretty state so far and we hope it continues.

Keep praying to the west wind gods and as always we appreciate your continuing good vibes.

happy birthday USA..one that John and Amy will remember for the rest of you lives..Go for it! AAR

Happy Birthday in advance, Amy! We are off to Culp's cafe for lunch today, wish you were here. Our 4th was rainy, but the kids had fun in their races anyway. Grace mostly enjoyed the "sock race" as she called it.(the sack race) Kayla swam several relays.
Abby is trying to keep up broken arm and all.

It's a hoot to read your blog. July 4 was beautiful in Buffalo as well. Great fireworks downtown and everywehere else. I thought you might enjoy some hometown news. Keep up the great ride!

I enjoy filling in Audrey's blog with other details you provide.
Looks like you are having a birthday soon, Amy, so Happy Birthday!
Sr. Audrey

Probably to late, but if you get a chance get some food at the "Feed Store" in downtown Springfield across from the capital.