Today was another long one, just shy of a century.

We started out with breakfast at Bob Evans. Now you would expect that everyone would know of Bob Evans. You would be wrong. Many of the riders including not only those from overseas but many from the US as well had never heard of Bob Evans. It might also be of interest (probably very little interest) that we saw for the first time a Dunkin Donuts. We guess that is evidence that we really are moving east. 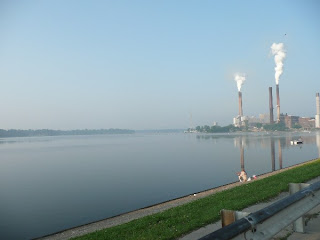 The day started dead calm as you can see from the smoke stack. As we are fond of saying, if the wind can't help us we ask that it at least be neutral, particularly on hard days. And today, neutral it was. 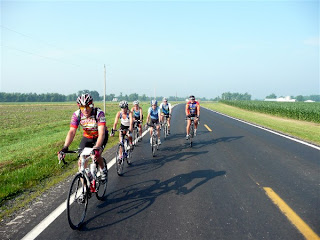 Within the first 5 miles, a group of about 11 riders hooked up and we ran a beautiful pace line until the first SAG stop at 31 miles. More on pace line later.

The first SAG was at an historic Lincoln spot. Apparently there was a cabin that Lincoln lived in but it was 600 yards into the woods and given that we had over 65 miles to go, no one decided to hike to see it. 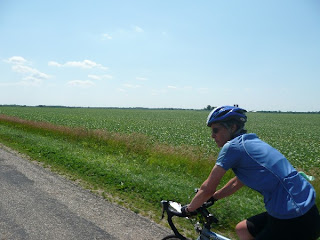 We rolled out of the SAG and continued through flat farm land that really is incredible to see. The corn goes on forever. And when it is not corn to the horizon, it's soy to the horizon. 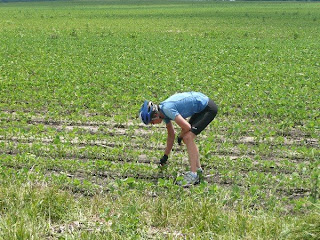 At one point, Amy took a hike into the field to see just what was growing. She's probably guilty of a IL felony, but she got away with it. It is truly amazing the fertility of this land. Now you would expect most people to ask questions concerning the number of people an acre of corn or soy can feed. And yes, we are curious about that. But in today's world, one also has to ask how far will an acre of corn take an SUV?

From the first SAG stop to the second SAG stop, our resident, virtual professional rider, George, from Frisco, Co., tried to organize a Tour de France type pace line. Such a pace line would have a lead rider “pull” for no more than 15 seconds and then move slightly to the left allowing the next rider in the line on his right to pull while the first rider slowed enough to come in at the back of the right hand line of riders. Think of it as an oblong, vertical clock rotating slowly counterclockwise. When done properly, it is poetry in motion. Since many of the riders had never been involved in such a pace line, George was having a difficult time setting it up. In fact, he said it was a little like herding chickens. Amy loved it. Many of the other riders were having difficulty with the system, but not Amy. In the words of the Spitzmillers, she thought it was a hoot.

We reached the second SAG stop at 62 miles in no time flat. After that stop, just the two of us peddled the final 36 miles on delightful back roads many of which were only one and half car widths wide. 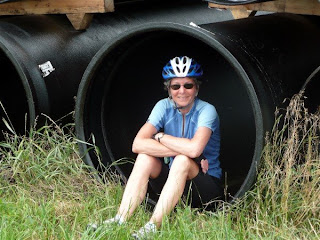 We took a short break by some sewer pipes and Amy decided it wasn't a bad spot to get some shade.

Given that the day was 98 miles long, some of the riders rode an extra 2 miles so they could call it a century ride. We pulled into the motel figuring 98 miles was enough and that no one (including you, our dear readers) cared whether it was a full century.

When we arrived we heard that another rider, Rob, went down. We don't have all the details, but apparently his wheel came in contact with another rider's rear wheel and he was down in an instant. Apparently his shoulder was dislocated and he was taken to the hospital. We wish him the best. We don't know if his head it the pavement, but nonetheless please dear friends keep wearing your helmet. This is a fun thing we're doing but, like anything, it has risk.

Two more days until we get a rest day. Given the miles over the last 5 days, the rest will be well deserved.

Finally, we continue to give thanks for your good vibes and in fact were reminded of those good vibes within a mile of our destination today, as 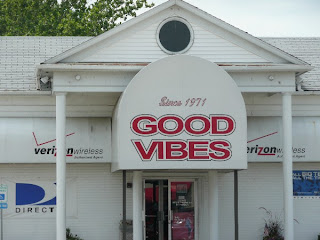 Prayers to the west wind gods will continue to be appreciated.