July 9, Day 39
Indianapolis to Richmond, IN
Mileage: 78.3
Weather: Mist and drizzle in the morning with broken clouds in the afternoon

As Willy Nelson sang, “On the road again: Goin places that I've never been; Seein things that I may never see again; And I can't wait to get on the road again”. So, we too are on the road again after a delightful rest day in Indianapolis. Portions of our anatomy have recovered so the saddle didn't seem quite as hard as a couple of days ago (although that may change in the next few days).

Overnight we had the mother of all thunderstorms. We awoke to wet pavement and very threatening skies but we never really suffered much other than mist and a slight drizzle. 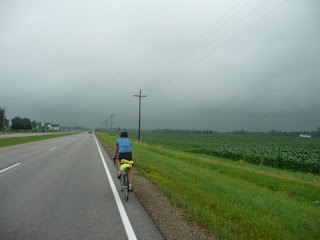 Enough wetness to make your glasses drip which in turn made keeping an eye on the pavement a bit challenging but never enough to make us really uncomfortable.

Rather than take the prescribed route we and a few other riders followed Skip, a great guy from Las Vegas, who grew up in Indianapolis. Skip decided it would be fun to take a peek at his old home and in the process we had an interesting tour of some of the residential areas of the city. It added several miles to the day but was fun, nonetheless. 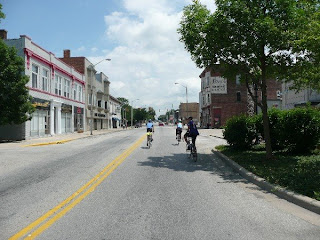 This part of IN is very much like one would expect of the east. You ride from town to town and in many cases you can't tell when you are out of one town and into another one except for the sign telling you that you're in a new spot. We rode on Rt 40 which has been around a long, long time and as a result there are all sorts of residential and commercial establishments along the way to look at. Every few miles you see a corn field but nothing like we're used to. 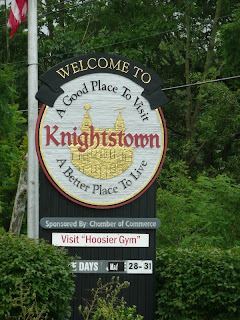 About 35 miles into the ride we rolled into Knightstown which in and of itself is just a very pretty little town. But for that you would simply roll on through.. BUT, it is also the very spot that the movie Hoosiers was filmed. We couldn't pass up the opportunity to see the gym where the movie was shot so we took a left of the main road and proceeded a few blocks and there we were. John had to pick up a basketball and give it try. He is convinced that in IN they have raised the height of the basket from where it is in NY. He's convinced of this because it took him about 5 tries before he could sink the ball. Someone suggested that 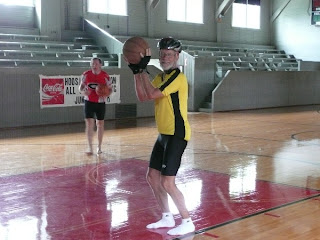 it might have something to do with the fact that John didn't have a clue as to how to shot a basketball. Who knows, that someone might just have been correct.

We stopped for a Subway at about noon with Sarge, a rider from Trinidad, and Steve, from Tasmania. Sarge has purchased what Amy refers to as a “boy toy”. It is the shape of a water bottle that fits in the water bottle cage, but it houses an ipod which has a bluetooth wireless operation to a controller on the handlebars. Sarge was riding to the Beetles all day and you could hear him for half a mile. It was neat. 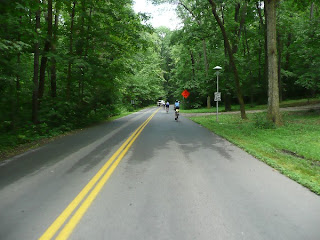 then went off route thru Glen Miller park which was delightful.

As the day ended, John took a look at the tires on the bikes and it was clear that the rear tires were finished. On John's bike we could see the underlying thread below the rubber. Time for a change. Those tires did well. Through thick and thin and some pretty tough roads these tires held up awfully well.

For the next four days we're going to be working hard, really hard. The days are 105, 104, 91 and 96. For all practical purposes that's four straight centuries. That's work. Unfortunately, the weather news is showing the E word when describing the wind direction. So, good friends and family, we would certainly appreciate your intervention with the wind gods. Who knows, unless you try you never know what you can accomplish so say a couple of prayers. Oh, and don't forget the good vibes. Thanks also for reading.

Good luck over the next few days. You guys are doing great. Say I to Sarge and the Tasmian devil (probably a new nickname ;^), ya' think?)

I give you BOTH credit - just thinking about the amount of miles ahead of you for the next 4 days - "OH BOY"!

John - you look like a TOTALLY different person! I wouldn't recognize you with that facial hair - and it's getting LONGER!!!!

Good vibes to you!
Colleen Z.

see you on Friday